When I've been meandering around the internet looking for knitting patterns, I've often come across those for knitted washcloths (or facecloths). We're cat sitting at the moment and I wanted something that I could easily take with me and would be quick and easy to do. What ever I decided on would also have to be saleable as I'm still trying to get back into the work habit! So,as  I'd got some knitting cotton left over from a throw/afghan I made a few years ago I thought about having a go at a knitted washcloth.

As this was my first attempt I used a pattern I'd found on the Lion Brand website called the Bluebird Beach washcloth. The pattern is over four rows and easy to remember and only took a couple of hours to complete. 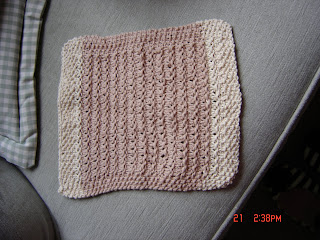 Having completed my 'prototype', I went in search of some more knitting cotton (I'd not got as much left as I thought) and found some organic cotton made by Twilleys of Stamford at John Lewis'. It's from their freedom sincere range and comes in a lovely range of colours.
I've now started on my first washcloth using a darkish pink (see below) using a simple basketweave and seed pearl pattern I've put together myself. 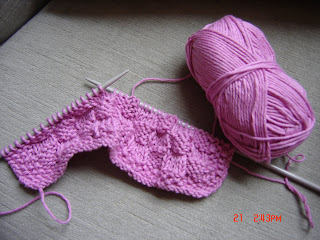 I did wonder why people (the Americans in particular) used knitted washcloths as I'd have thought they'd be a bit soggy compared to a towelling facecloth, but having used my prototype in the shower I'm converted. It was easy to use, 'felt' better than a towelling one and dried just as quickly. I foresee a few people getting these as birthday/Christmas presents!
Posted by Louise@ElsieMayandBertha at 15:49