The Museum of Liverpool (part 1 - the building and its surroundings)

﻿Last Thursday night (21 July 2011), I was fortunate enough to be invited to a private view of the new Museum of Liverpool, the latest museum in the National Museums Liverpool stable.

I'd watched the Museum being built, both from the Liverpool side and at a distance, 'over the water' from Egremont Promenade, so I was looking forward to seeing the building 'up close and personal' as it were.

The building, in its self, is worth a visit. I think it sits perfectly with the three graces (the Liver Building, the Cunard Building and the Port of Liverpool Building), the canal extension and the new ferry terminal, as although the three graces are a lot older (it was the the Liver Buildings 100th birthday the same night) they've all been built from the same coloured stone. So though the Museum of Liverpool is a modern angled building on the outside (internally it's quite curvy) I think it fits in quite perfectly. After all, many people didn't like the Liver Building when it first went up a hundred years ago. So I think, in a few years, the new museum will be considered as the fourth grace.

On the outside of the building, the stone has been cut to provide lots of angles and shadows to enhance the building's angular shape and to play with perspective.

Outside the building, there are three of the popular lambananas. These were created as part of the lambanana trail that was set up for the Capital of Culture in 2008. They were sold off at the end of 2008, but there are still a few dotted around the city. 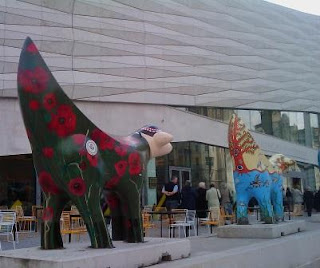 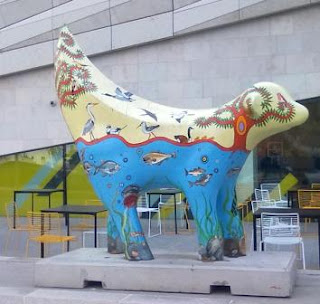 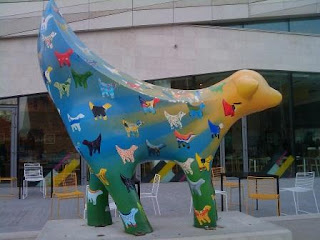 On Thursday night, outside the building, a couple of Liver birds had popped down from the Liver Building to welcome us into the new building.


On entering the building, with the cafe on the left and the shop on the right, you can see that the inside of the building is is curvey, with a large concrete staircase winding up out of the centre of the ground floor.


The curving lines of the staircase, juxtaposed next to the walls, floors etc, creates lots of lovely angles.


As well as a couple of glasses of wine, and nibbles (these don't half make viewing in a museum 'civilised'!) we were welcomed by the National Museums Liverpool's chairman, Phil Redmond (of Brookside and Grange Hill fame) and their director, David Fleming.
My next post will be on some of the exhibits inside the Museum of Liverpool.

You can see more of the pictures I took of the building, and its surroundings, on the Elsie May and Bertha Facebook page.

TTFN
Louise
Posted by Louise@ElsieMayandBertha at 13:33