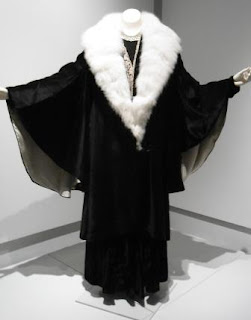 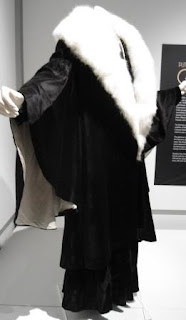 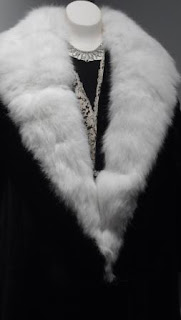 This evening coat is made from silk velvet and angora rabbit fur. It was bought from George Henry Lee & Co, Liverpool about 1930-36 by Mrs Emily Tinne, a Liverpool lady with a great love of fashion.

This evening dress made from rayon jersey, about 1938-40.
Fitted and draped dresses were especially fashionable during the 1930s . The separate pattern pieces were cut out of the fabric on a diagonal to the direction of the threads. This was known as bias-cutting. It gave the dress pieces stretch so that they could be closely moulded to the body’s shape when  the garment was sewn together. 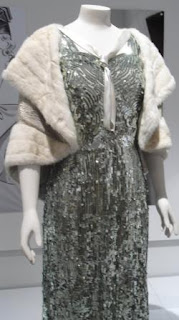 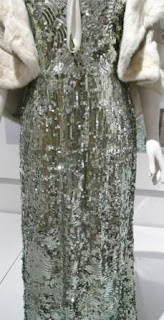 This evening dress is made from cotton net and metallic sequins in about 1935. The shoulder cape worn with it, is made from silver lame and rabbit fur and was made in the 1930s.
Sequinned dresses were fashionable throughout the 1920s and 1930s. 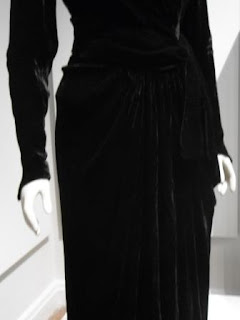 An evening dress made from silk velvet in about 1939-40.
During the late 1930s, evening dresses with padded shoulders were especially fashionable. The wide shoulder-line was exaggerated further by a nipped-in waist and padded hips, resulting a v-shaped bodice. The film star Joan Crawford often wore dresses in this style, which were widely copied. 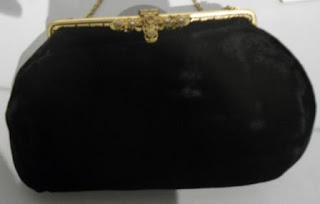 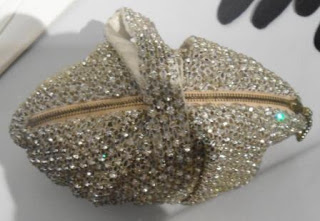 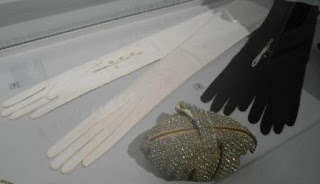 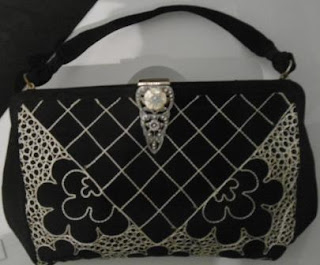 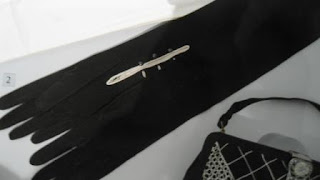 During the 1930s, long gloves of fine black or white leather were often worn with evening dresses. Evening bags were small and could sometimes be attached to the owner’s wrist with a strap or short chain.

This is the last installment of the posts about the exhibition, Putting on the Glitz. I hope you've enjoyed seeing the beautiful frocks and accessories as much as I did.

Click on the links below to see the first two posts.
Part 1.
Part 2.

Posted by Louise@ElsieMayandBertha at 14:30