With Christmas soon to be upon us, my other half was concerned with the sourcing of the pork (we've always had pork rather than turkey) for the main event (i.e. the Christmas dinner) by my Mother (she's the caterer for the occasion) so he had arranged a visit to the farmshop at Chatsworth. The farmshop, although part of the Chatsworth estate, is actually at Pilsley, a couple of miles away from the house.

With the snowy weather being about we were a little concerned that we wouldn't be able to get there (Buxton, which is on the way to Chatsworth, is very good at getting 'cut off by snow), but fortunately, the snow kept to the other side of the Pennines so the journey was easy.

Having taken refreshment (there's a great restaurant) and purchased all of the necessary items for a culinary delightful Christmas (if you've never been to Chatsworth's farmshop, do go if you have the opportunity to) we drove to Chatsworth House.

In the time running up to its closure on 23rd December, the house is decorated for Christmas. This year was the theme is 'A Russian Christmas'. There's too much to see for me to describe it all here, but here's some of the high-lights. 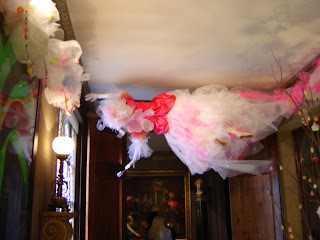 The first is decorated with sweets and cupcake glass decorations and a huge 'sugar plum fairy', with the netting of her skirt going all around the room. 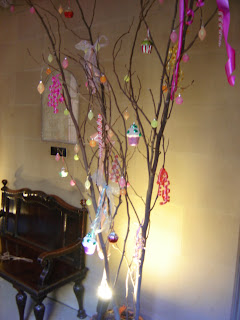 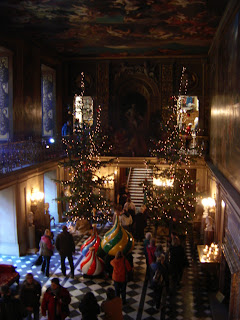 The dining table in the dining room had been beautifully set for dinner and was lit by candlelight. 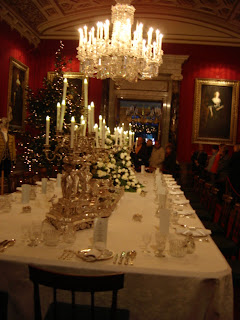 The final room on the tour through the house is full of statues, and the room had been decorated with arches made of fir tree branches and baubles. The lighting was low with a projector playing snowflakes all around the room. 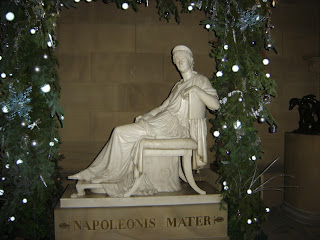 There's a really good gift shop at the end of the tour. This year you can buy Russian-style Christmas decorations and Russian dolls. There are further shops, including an interiors one, in the Stables, along with two restaurants. All well worth a visit.

TTFN
Louise
Posted by Louise@ElsieMayandBertha at 15:44 No comments:

On knitting a scarf

I love knitting. I like the fact that you can take a single thread and turn it into a fabric. It's also easy to do anywhere. When we were in Scotland last month I easily knitted a washcloth a day, just when we were out and about in the car.

There's almost too much choice when it comes to 'wool' (be it thread made out of wool, cotton, or any other fibre that can be spun for that matter) though. Not that I'm really complaining, but I do have much more 'in stock' than I could possibly knit with for the foreseeable future. This fact, however, doesn't stop me buying more! 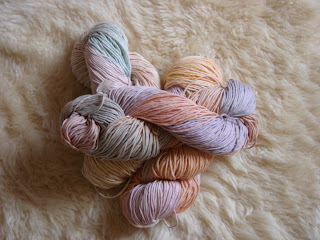 When we were in Oban last month, I had to pop into Whitmore and Hamilton to see what they had and, of course, I came out with something! I bought two lots, one being pastel multi-colour cotton (see picture above), which, as I'll be using it to make washcloths for my Elsie May and Bertha shop, can be construed as a legitimate business expense (especially as it was on offer), but the same cannot be said for the baby alpaca, silk and cashmere blend I also came away with (see picture below). I've not the foggiest idea of what I'm going to do with this as yet. 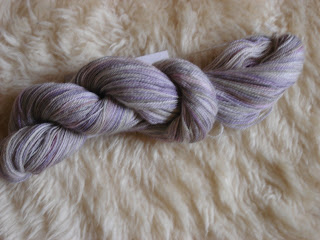 I had the same problem when we went to the Unlimited Colour Company, which is a wonderful shop on the High Street in Ullapool (we went there during our May Scotland trip this year - a beautiful trip from Invergarry). They had such a beautiful array of wool, so I just had to buy some didn't I? I bought a couple of hanks of a Manos del Uruguay (the name mean the Hands of Uruguay) silk blend in cerise purples and oranges (see picture below). I do try to buy British when it comes to wool, but as this is from a not-for-profit company that gathers artisan's work together and brings economic and social opportunities to rural women, I'm more than happy to make an exception. The alpaca blend I mentioned above is another one of their products. 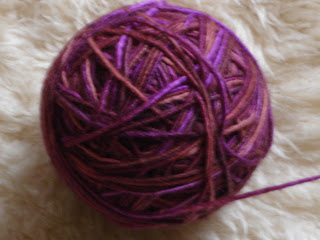 The other wool I bought that day was actually 100% silk and was produced by Collinette Yarns in Wales﻿. This one is multi-coloured pinks and purples as well (see next picture). 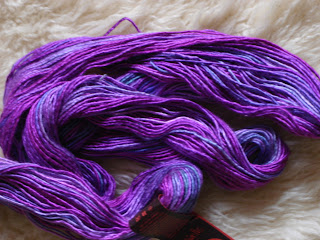 Fortunately, I quickly found a use for the Manos cerise purpley one, as a couple of days after buying this we went to the Mallaig Art Gallery where they sold some Ness handbags. To my delight there was one in just the same blend of colours as the wool. If I had the handbag, I could knit a scarf to match. My other-half, kindly agreed to my buying the handbag as my wedding anniversary present (21 years and still counting). 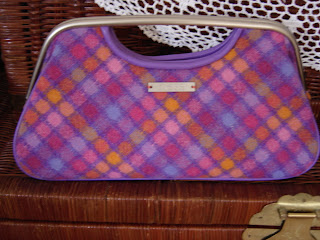 So as well as my other making activities, I've been knitting my scarf, though as I am making other stuff at the same time it's still a work in progress. I'm using a really simple pattern, K1, yarn forward, K2tog, that gives an open loop effect without too much hard work. This scarf could be knitted at any width, you just need to work in multiples of three. Work four rows in garter stitch at each end to get a neat start and finish. 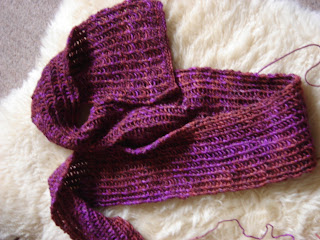 It's about five foot long at the moment, so I'm just going to add a couple more feet worth and then call it done. I don't want to end up with a Dr. Who (Tom Baker) scarf! But, you can make it as long or short as you desire.
TTFN
Louise
Posted by Louise@ElsieMayandBertha at 16:16 No comments:

On the joys of a cold, bright November day

Don't get me wrong, I like a warm, sultry summer's day, but you can't beat the clarity of a bright, but cold, day. The problem with the heat of a summer's day is that it creates a haze, which makes viewing distances especially, fuzzy. Whereas when it's cold and bright the clarity is much better. We take much better landscape photographs in Scotland when we go in October, than when we go in May. Today we took a walk along the promenade to New Brighton. 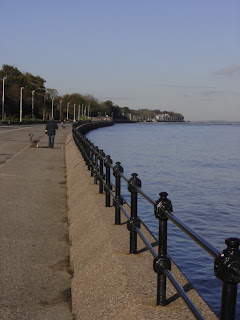 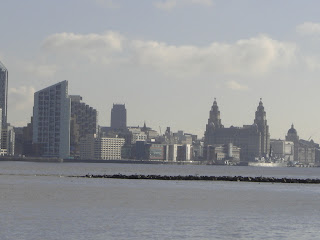 Not very exciting you might think, but you'd be wrong. As you look up the river from the Pier Head, you first come across the tobacco warehouse in Stanley Dock, it was claimed that it was the largest brick built warehouse in the world when it was built in 1901 (it's amazing the bits of information you can pick up from the internet!). Unfortunately, a new use still hasn't been found for it as yet, so it stands in decaying splendour at present. 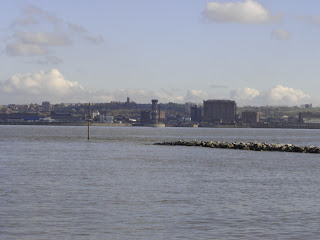 Farther along, there's the docks where the great liners used to leave the Mersey for America.﻿  Admittedly, the next bit isn't pretty, as it's tanks of some description. What follows is a mixture of sheds, and other buildings in a mixture of blue and beige. They look especially good next to a blue and sunny winter sky. The colours match perfectly. Eastman colours, my mother calls them (Eastman produced film from the fifties onwards that had soft overtones).
On our side of the river, just before you get to the end, you walk past Vale Park. There are some lovely autumnal trees there at the moment. 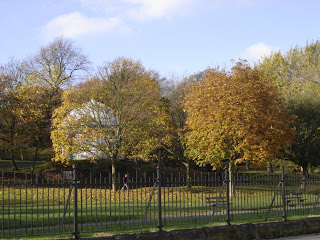 Though, with the windy weather we're having at present, I'm not sure how long the leaves are going to last on the trees!
TTFN
Louise
Posted by Louise@ElsieMayandBertha at 16:47 No comments: