When I was in London last year, I had tea and toast in the Peyton and Byrne restaurant at the Wallace Collection. They were selling copies of Oliver Peyton's (of Great British Menu fame) 'The National Cookbook', which I bought. This year my Mum and Dad were in London and, again, had tea and toast (great marmalade and jam) at the Wallace. This year they were selling Oliver's new book, 'British Baking'. Normally, I would borrow a cookbook from my Mum to take note of the recipes that I'm interested in, but this time there were so many recipes I wanted to do, it was easier to buy my own copy. 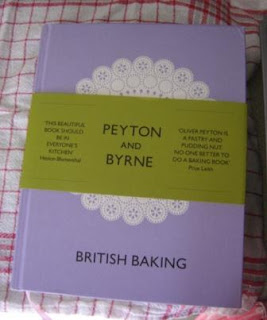 I've not made a cake in a while, so I decided on the lemon drizzle cake, as I'd bought a few lemons for the odd gin and tonic! Plus it's a fairly simple and straight forward loaf cake. 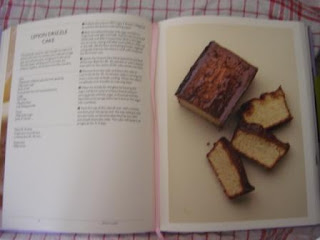 To make this cake yourself you need:
Preheat the oven to 170C/gas 3. Butter a 900g loaf tin and line the bottom with baking paper.
Beat the softened butter, sugar and salt in a large bowl until light and fluffy. Add the lemon zest and whisk well until fully incorporated. Beat in the eggs one at a time, mixing well after each addition, then add the milk.Sift the flour and baking powder together and gently fold into the mixture until well combined, but don't over mix. 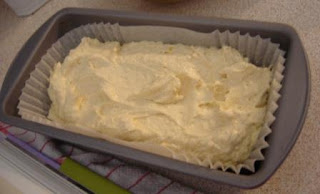 Spoon the mixture into the prepared tin and level off the top. Bake for 40-45 minutes or until a skewer inserted into the centre of the cake comes out clean. 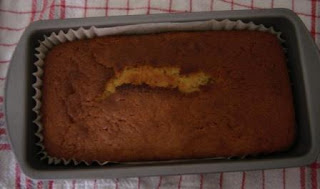 Remove from the oven and leave the cake to cool in the tin for 10-15 minutes, before turning out onto a wire rack to finish cooling. When the cake is completely cook, transfer to a serving plate.

Make the drizzle for the glaze by heating 100g caster sugar and the juice of one lemon in a heavy-bottomed pan, stirring until the sugar has dissolved and the liquid becomes syrupy (don't let it boil or the sugar will crystallise).

Prick the top of the cake all over with a skewer and then pour the syrup over the top, letting it sink into the holes, to become absorbed by the cake, and drizzle down the sides. The cake will keep in an airtight tin for 3-4 days. 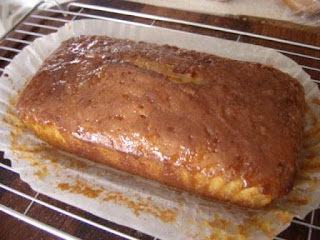 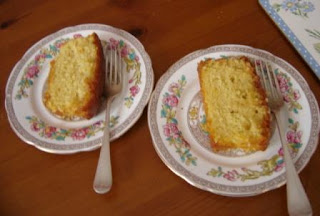 If you like baking, you'll love this book, with its headings of biscuits, cakes, fairy cakes and icings, fruity cakes, tarts and pies, puddings, breakfast goods, a cup of tea and a bun and special occasions, there's plenty of good baking recipes to choose from.
By the way, it tasted great.
TTFN
Louise
﻿
Posted by Louise@ElsieMayandBertha at 16:36 No comments:

Skincare - doing our bit for the environment

After buying one of my washcloths, a friend asked whether I could make something smaller for removing make-up. I knitted a few samples and she tried them out to see which one worked best - and the cleansing cloth was born. 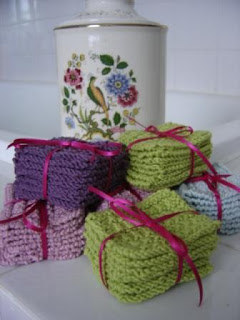 These squares are knitted on smaller needles than the washcloths so that the 'more solid' so that whatever you use for removing your make-up doesn't fall through. 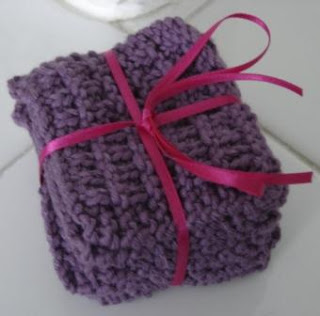 As these cloths are washable it means that you never have to throw away a cotton wool ball or pad again. So if you use these instead of of cotton wool your make-up is removed and you're doing your bit for the environment and they're knitted from organic cotton too! 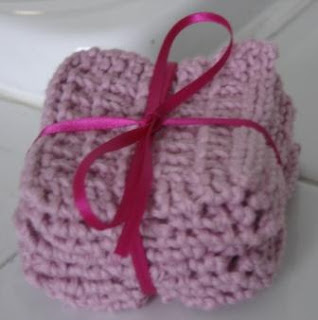 We're selling these in sets of eight, that way you have one for every day of the week and one left while the others are in the wash. 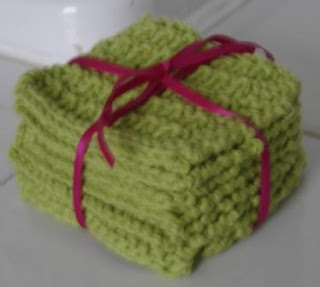 ﻿
﻿
If you'd like your own set of cleansing cloths, or one of our washcloths, visit the Elsie May and Bertha website to see what's available.

Who, of men, can tell that flowers would bloom (John Keats)

I know I've gone a bit booky quoting Keats, but the flowers, especially the roses, that are already blooming in our garden, are creating a lovely display. I was wondering whether anything would have survived all that snow and cold weather we had last winter. But nearly everything has survived (we lost a verbena) and things seem to have actual benefited from the cold. 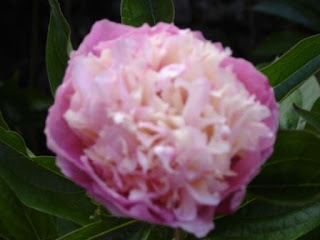 This is my first peony flower. It's called 'sorbet' and I planted two of them a couple of years ago. The other plant hasn't flowered as yet, but both plants have put on good growth this year. 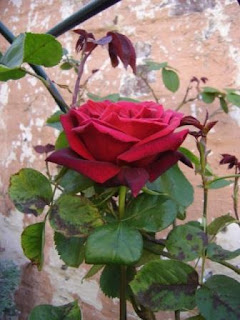 Please ignore the black spot, it's on most of my roses and although I have sprayed in the past, with having the two cats I don't like spreading chemicals about. A more dedicated gardener would probably do something else to get rid, I just ignore it!

I can't remember the name of the deep red rose above, we've had it for nearly 20 years! It has a small number of blooms on it each year but they are so beautiful. They look like velvet and smell divine. 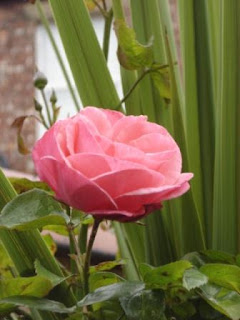 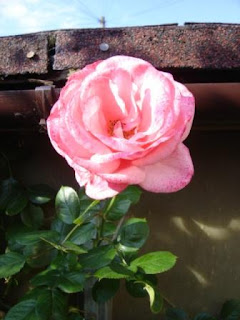 These two roses are from our climbing rose that my Mum and Dad bought for us years ago, so again, I can't remember the variety. It flowers profusely, even during the winter if it's mild. There were still blooms when it was snowing last winter! 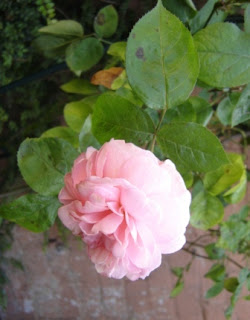 This is a ﻿bloom from another climbing rose, Eglantine. It's a lovely double rose that, again, smells lovely. I can't really see the point of a rose that doesn't smell nice. 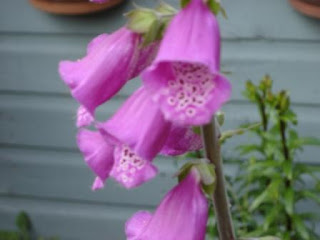 There's a few foxgloves in our garden, all of which come from the one plant that came from a seeds that a bird must have dropped because I didn't. I love how they self-seed themselves all over the place. The only disadvantage is that they don't flower in the first year, but now I have lots of them some are one year and others are two years and over.
There's lots of other plants growing, some are still seedlings, so there'll be lots more to see and smell in the coming weeks.
TTFN
Louise
Posted by Louise@ElsieMayandBertha at 10:53 No comments:

Coffee and cake, and a little shopping

One thing I don't do often enough is to go shopping with my Mum. There's nothing wrong shopping with my better half, but there's always that feeling that he really doesn't want to look at all of the frocks in John Lewis'. Not that I can criticise, as I'm writing this, there's a smell wafting up the stairs of the scones he's got baking in the oven. You can defintely NOT criticise that!

Anyway, back to my story. It's my sister's birthday in a couple of weeks so we were on a shopping trip to buy her her presents. As the start to all visits to Liverpool usually involves breakfast, we started with that. Now, normally, we sup at John Lewis' 'a place to eat', but as we needed to be up at the top end of Bold Street for one of our prospective purchases, my Mum suggested we pop to The Italian Club. 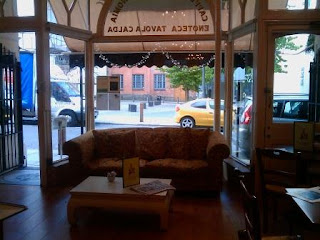 We normally go to the Italian Club for lunch, so we weren't sure what we'd be having. Lyndsey (she was in charge, Greta served us) said we could have smoked salmon and scrambled eggs, which did sound tempting, but I'd already looked at the cakes on the counter! And it is an Italian thing (isn't it?) to have something a little sweet with your breakfast cappucino! So cake it was. 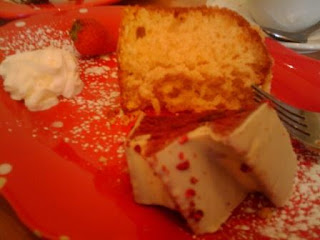 Two cakes looked tempting, the lemon drizzle (the one at the back of the plate in the photo above) and raspberry and chocolate (the one at the front). As we couldn't decide which to have, we had one of each and shared.

The lemon drizzle had pieces of candied lemon peel on top of the icing and lovely crumbly cake. The raspberry and chocolate had white chocolate on the outside, with dried raspberry pieces and was a lovely moist cake, that was browny red in colour. Both were delicious, and had been baked in circular tins with a whole in the centre (like German bundt tins). 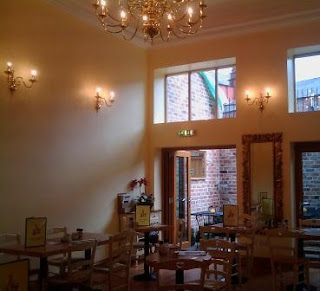 As we were waiting for our coffee and cake, I had a look around the new extension that's just been completed. They've punched through what was the back wall of the restaurant, into the barrel-vaulted room behind and creating lots of light by adding folding doors and windows in the new back wall. There's even a small place for table outside, with some lovely brick walls forming a small courtyard. 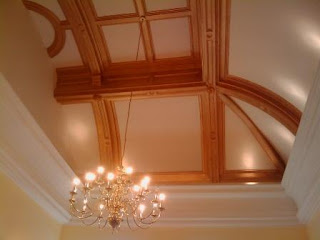 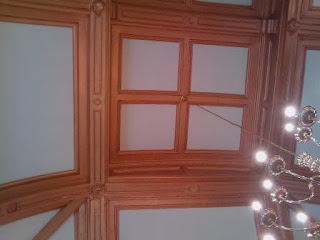 The moulding of the vaulted ceiling has been picked out in gold, but when you look at it you can see that the room it was over used to be a lot bigger, as the mouldings disappear into the wall (forming part of the next door shop Red Lotus, though you cannot see it in there).

As well as adding more space to spread out and add additional tables, the Italian Club now also boasts a couple of lovely settees, one in the front window (see the photo at the top of this post) and another in the new extension (see below) along with a few tub chairs. Making the place ideal for a cup of coffee or a delicious lunch. 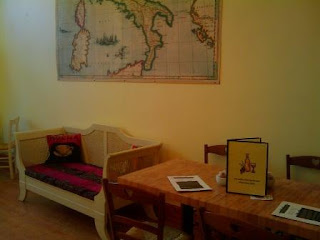 If you're ever in Liverpool - do pop into the Italian Club, you'll love it.

Although we were having a good time, drinking coffee and chatting wouldn't get the shopping done, so we had to leave. Now, as she may read this missive, I cannot reveal what we bought for my sister, but I can tell you that we bought items from Red Lotus (as previously mentioned, they're next door to the Italian Club) and the Chocolate Cellar (handmade chocolates to die for at the Hanover Galleries, Hanover Street!).

Louise
Posted by Louise@ElsieMayandBertha at 10:11 No comments: