Not had a that bad a week making-wise, as I finished most of what I wanted to (apart from my commission for blue embroidered fish - I'm a bit stuck at the moment).

My Mum and Dad brought me some postcards of the new tapestries at Stirling Castle, the favourite residence of Scottish King and Queens (click on the link to see the Castle's website. There's lots of info on the castle and it's residences). Over the past few years, weavers from West Dean Tapestry Studio have been creating a series of tapestries to be hung in the Queen's Inner Hall.


These tapestries, featuring a unicorn, are closely based on a set of seven held by the Metropolitan Museum of New York at its Cloisters Museum. The original tapestries were produced in the early 1500s in the Low Countries.Tapestries were extremely expensive and were prized by the wealthy elites of the European Renaissance. James V had two sets of tapestries featuring unicorns, so something similar may have hung on the castle.

I'd have loved to see how the tapestries were made as they're woven, as opposed to the tapestry that I have done which were needlepoint. It's on my list of things to study. 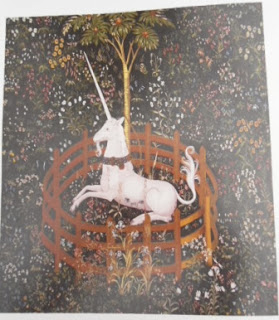 There's another set of new tapestries in Scotland, the Great Tapestry of Scotland, the brainchild of the author Alexander McCall Smith. Andrew Crummy designed the panels, which reflect the history of Scotland. The tapestry was worked, using a variety of needlework stitches, by volunteers. Currently, it is thought to be the longest tapestry in the world, with a length of 143 metres. In comparison, the Bayeux Tapestry is 70 metres in length. As the history of Scotland is still happening, the tapestry will continue to have panels added to it. For example, Andy Murray's Wimbledon win will be celebrated in tapestry.


Unfortunately, I haven't had the chance to see the tapestry in real life, but I hope to explore the tapestry as part of my needlework learning. The book about the tapestry is on my Christmas wish list.

The first item on my completed list this week is a commission of five brooches from the Leigh Network. Faye Wylie has Leigh's Syndrome and when she tried to find a support group of other Leigh's sufferers she didn't find one so she set up the Leigh Network.

Leigh's Syndrome, like chronic fatigue and fibromyalgia, is a mitochondrial disease.

She also designed the Leigh Network butterfly, which I have used for their brooches.

The design of the butterfly represents different aspects of mitochondrial (mito) diseases.
I hope to sell these brooches via my website soon, with profits going to the Leigh Network.
I also finished: 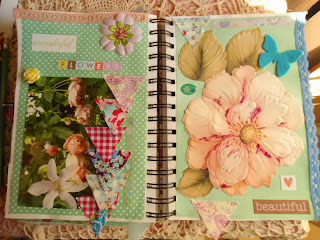 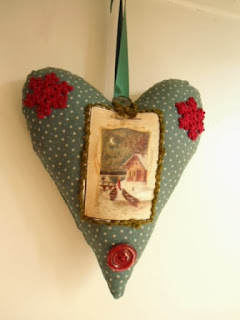 I hope your week is a creative one.
TTFN
Louise
P.S. Pop over to Handmade Harbour for more craftiness. I'll be linking with more blog parties too, you can see the buttons for these in the right-hand column of this blog.

Posted by Louise@ElsieMayandBertha at 13:08