As I mentioned a couple of weeks ago, I'd recently visited the Walker Art Gallery to see their updated exhibition of  Mrs Tinne's Wardrobe (the previous exhibition that I saw was in 2006), showing a selection of the clothes in her wardrobe.

A bit of history.

Before she married, Mrs Tinne was Emily Margaret McCulloch. Her father was a Presbyterian minister and was a the principal of a theological college in West Bengal when Emily was born in 1886. She was sent to boarding school in England, along with her brothers and sister, when she was seven and summers were spent at their Aunt's in Edinburgh. Their parents didn't return to the UK until the 1920s.

When she was eighteen, Emily trained to be a domestic science teacher. When her studies were complete, Emily and her Aunt moved to Liverpool to live with her Uncle (and her Aunt's brother). Her first job was as a domestic science at the Liverpool Training School of Technical College of Domestic Science. It was during this time that she met Dr. Philip Tinne, a local GP. They became engaged in 1909 and married on 14 July 1910. When they were married they lived in Oak Cottage, at 6 The Serpentine, off Aigburth Road until 1923 and then moved to Clayton Lodge, 32 Aigburth Road, where they lived for the remainder of their lives.
The collection.

The Tinne collection has over 700 items and it is unusual to have such a lot of items from a single family.


Emily could only create her collection of clothes as her husband had large private means as well as his work as a doctor, though the large amount of clothes, underwear, shoes and hats that she bought were the cause of some tension between Emily and her husband. Many of her clothes were bought from Liverpool's department stores, including Owen and Owen, George Henry Lees (now John Lewis'), Bon Marche and Lewis'. 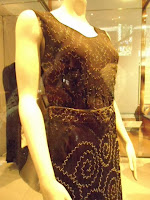 Some of the clothes in the collection still have their shop labels in them and others show hardly any wear. As well as a love of clothes etc. Alexine, Emily's  daughter, thinks that she may have bought some of her collection to provide the poorly paid shop assistants with some commission during the Depression.

I've used Pauline Rushton's book on Mrs Tinne's Wardrobe to write the above. There is a lot more information on the Tinne family, the shops in Liverpool, photographs and a complete list of the full collection in the book, which you can buy from the Gallery.


The pictures in this post, except the portrait of Emily (c National Museums Liverpool) are taken by me.

Posted by Louise@ElsieMayandBertha at 16:55